Showing posts from 2016
Show all

December 30, 2016
This idea is for the extremely small investor, but it came across my newsfeed and it's an easy layup for anyone with a lot of cash so it was worth sharing: Paybox (OTC:PBOX) announced this afternoon that it has decided to go private by doing a 1 for 1,000 reverse stock split. Any shareholder that doesn't own at least 1,000 shares will be cashed out for $.80 . By cashing these shareholders out, PBOX will have less than 300 shareholders on record, and will effectively be a private company under the Securities Exchange of 1934.  This saves them money from not having to file documents with the SEC. The reverse stock split will be put to a vote at a special meeting on a date to be announced in the near future. Investors relations said the date will be released after the SEC reviews the docs. Simple thing to do: buy 999 shares for .50 (what was being offered at time of writing) and cash out for .80 Because all officers and directors as a group control over a majority of the c
Read more

December 22, 2016
Surge Components today announced a tender offer for 5m shares or roughly have of their outstanding stock for $1.43.  The tender must happen before March 15th, 2017. This tender was a result of discussions between activists Bradley Rexroad and Michael Tofiaas who together own 22% of the outstanding shares.  In return they dropped their litigation against the current management, gain a newly elected director, and it was agreed that Surge would reincorporate from Nevada to Delaware. Rexroad and Tofiaas are said to tender all of their shares.  Shares as of this writing were still available for 1.30, however no 8k has been filed yet so proceed with caution.
Read more 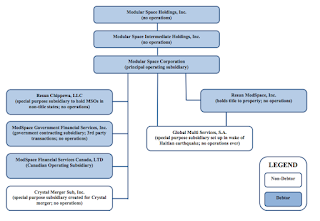 Today Modular Space Holdings and its affiliated debtors filed a petition for relief under Chp. 11 of the Bankruptcy Code in the District of Delaware while a wholly owned subsidiary, ModSpace Financial Services Canada (MFSC) commenced its proceedings under the CCAA in Toronto, respectively. According to the first day declaration , "ModSpace is the largest U.S.-owned provider of temporary and permanent modular buildings, and is among the largest suppliers in the U.S. and Canada of temporary modular space and permanent modular construction." ModSpace occupies 142 locations including branch and service centers throughout N.A. with 639 employees. 41 locations are owned and 101 leased. ModSpace's Corporate Structure is shown below:   Modspace's Capital Structure consists of $984.2m of outstanding long term debt and $37.7 of accrued interest. $609.2 million of it is under an ABL facility, including $3.2 million of funded letters of credit, plus accrued i
Read more

On December 14th after months of searching for a buyer Violin Memory filed for chp 11 in the District of Delaware.  The case will be handled by the Honorable Laurie Selber Silverstein and the docket is here:  https://cases.primeclerk.com/VMEM/Home-DocketInfo VMEM is rapidly burning cash and is looking to sell all of its assets in Chp 11 to maximize what value is left for its note holders.  In the first day declaration management provided the weekly cash projections and the timetable for the bidding process: VMEM had a $162m IPO in September of 2013 and since then has struggled to meet its revenue expectations, never turning a profit. In October of this year the equity was delisted from the NYSE and now trades OTC (equity is essentially worthless). In September of 2014, VMEM issued $120 Convertible Senior Notes that are unsecured and accrue interest at a rate of 4.25% per annum, payable semi-annually.  Currently these trade at .20 on the dollar. Below is a list of 98% of the
Read more
More posts